I spent a glorious day visiting American University. Clear-blue, sunny, warm skies; flowers in bloom; students clad in sun dresses, shorts, and flip flops playing frisbee on the grass abounded on one of the first days of spring. It was ideal weather to view the school. I saw several classes being taught outside with professors and students in a circle on the grass.

I also learned a new term, “Hipster Chic” to describe the type of kids that attend AU in terms of dress and personality. Students seem to be active and do a lot of different activities. I spoke with one student who played club rugby, studied abroad, had an internship and was also part of a sorority. She liked the ability to do a lot of different activities and felt like the workload allowed for that. There is also a large international population.

American is a relatively small campus, with the six major college buildings surrounding a green quad area. All students are admitted to American University, rather than any specific school, however all students ultimately major in one of the six schools which include the College of Arts and Sciences, the Kogod School of Business, the School of Communication, the School of International Service, and the School of Public Affairs. Each school has a little cafe on the ground level for students to converge, study, and grab a bite to eat. American’s location is ideally situated in the Northwest part of DC, which is the toniest area of DC. The foreign embassies are close by and the department of Homeland Security is across the street making government related internships easily obtainable. The metro is about a mile away and shuttles take students every ten minutes back and forth until 30 minutes after the last metro. The strongest programs at American University are International Service, Visual and Performing arts (I got to see a dance class in session as well as a wonderful student art exhibit), Politics, Business, and Communications. 60% of students study abroad.

Academically, the average admitted student had a 3.6-4.1 GPA, a 1220-1390 SAT (They only look at M and CR; writing is not considered) or a 27-31 ACT score. They take the best composite ACT, but will combine the SAT for the best combined score of Math and Critical Reading. American also has an honors college for students with an average 4.0-4.25 GPA and 1438 SAT or 32 ACT. They are also very generous with merit scholarships to the top 20% of their incoming class. The average award is between $15,000 to $29,000.

On the downside, the tunnel leading to the student center is unattractive and looks like you are at Penn Station in New York.

Also, American is a completely dry campus, even for those students who are 21 years old. Therefore, most of the partying goes on at the off-campus at fraternity parties or in DC proper. 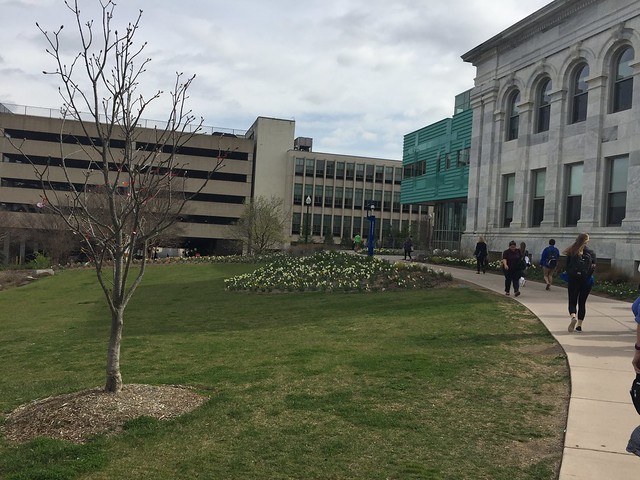