We started off our tour with an address from the New President, the first female President of the college.  She came from University of Wisconsin.  She described Amherst as incredibly diverse, intellectually intense, and vibrant.   She and the college are committed to continue with their push to keep Amherst among the most racially, ethnically, and geographically diverse campuses.  The Amherst student body is 11% Hispanic, 12% African American, 11% Asian American, and 17-18% first generation college students.

She was right about the intellectually intense vibe.  The students on the panel were incredibly articulate, thoughtful, and intellectually curious.  They also had a very strong sense of self and exuded confidence.   Each one on the panel was more impressive than the next.  Below is a sampling of the types of students that Amherst attracts.

Lilia, an anthropology major, is on debate team and works with several publications and college run magazines on campus. She also participated in a student run conference for student anthropologists with the Five College consortium.  Her debate team placed third in the nation.

Julie, a history major, is writing her senior honors thesis on Holocaust Humiliation Through Photography.  She does research with professors and is taking a class at Hampshire on culture and idea of photography.

Fabana, a neurology major, leads study sessions with freshmen.  She studied Italian at UMASS to prepare herself for a semester in Italy.  She also plays lacrosse on a UMASS club team.

Jesidu has not yet decided on his major.  He has taken advantage of Amherst’s open curriculum to study what interests him. So far he has taken classes in 11 different departments and enjoys learning for the sake of learning.

Allejandro, an economics major from Venezuela, is part of the men’s undefeated soccer team. He came to Amherst because it would enable him to play at highest level of the sport without sacrificing academics.  In the fall he is a true scholar athlete.  In the spring, he gets involved in community service.  He also started a Dominoes league of sorts where he plays with his friends and invited people from different sectors, e.g. staff, faculty, and the President to play.  One night they had 45-50 people playing Dominoes.

The campus itself has some parts that are quite beautiful, but overall it is a fairly disjointed campus on a hill.  Each section is on a different part of the hill.  The dorms, though, are quite stupendous and all of the buildings are renovated and new.  There is one single dining hall to promote a strong sense of community.  The most popular activities on campus are studying, sports, singing, and the outdoor club.

Amherst is an excellent school for intellectually curious, athletic students who are not afraid to work really hard. 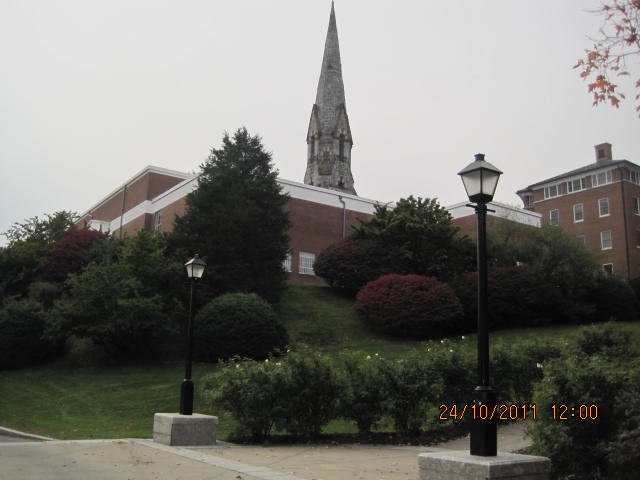