Beloit is a small, liberal arts college that brings together a diverse group of creative, independent, open-minded students.  Some of the adjectives to describe Beloit students include non-competitive, intellectually curious, first generation, multi-interested, internationally focused, politically minded, relaxed and collaborative.

Jim Zieleski the Director of Admissions said, “Most people don’t know about Beloit before they come, but once they find Beloit, they are hooked.” 83% of the students come from outside of Wisconsin and 90% stay after their first year.  Beloit represents a diverse student body: approximately a quarter of the students play a varsity sport, 1/3 participate in performing arts, 25% are the first in their family to go to school and about 20% receive a Pell grant.

Beloit has no core curriculum, so students have the opportunity to carve out their own interests.  However, students should come ready to write across the curriculum from Creative Writing (one of the largest majors) to Anthropology (another strong discipline) to Physics.

The tight knit community of professors and students define the campus life.  We had the opportunity to hear a panel of faculty and students.  Professors push students to always ask why?  A Political Science professor explained how in her Political Theory and Public Law class she tries to de-familiarize students with things they take for granted.  Asking them questions like, “How does power operate in our lives?”

One of the students described how he was exploring the Muslim community in China and his professor helped him secure a grant to study the Chinese Muslim minority in China. The overriding theme emerged that professors empower students with a sense of agency.

They teach them that they do not have to accept things as they are and it is up to them to be an agent of change.  The students feel like they have the skills to navigate systems that go beyond their major. This sense of empowerment resonated with all of the students we met.  I sat next to a young man from Missouri who had gone to Beloit for his first year and then transferred to West Point.  (He had originally been accepted to play soccer at West Point, but had to defer for a year due to an injury.)

After one year at West Point, he transferred back to Beloit because he missed the intellectual engagement in the classroom.  He was a senior majoring in physics and was applying to graduate schools in Nuclear Engineering.  He credited his Beloit physics professor with mentoring him to this path. They also have an impressive 90% acceptance rate into medical school and about 8% of graduating students join the Peace Corps.

The campus itself is pretty with a clear delineation between the academic and residence quads.  There is an Anthropology museum right on the campus along with a brand new, beautiful science building and athletic field about 3 blocks from campus.

However, there is also a lot of deferred maintenance in the dorms and sorority houses (we saw lots of peeling paint in several of the sorority houses.)  There is also no official real student center, but students said that the residential community serves as a place to congregate.  Since it was the first nice day of spring, we saw students playing Frisbee on the residential quad, laying out, and rehearsing a dance routine outside.  Student seemed happy and chill.

The city of Beloit, an old rust belt town, is fairly depressed and there is not that much to do outside of campus.  It is located about 50 miles from Madison, WI and 75 miles from Chicago. There was a long stretch of fields en route from the Chicago O’Hare airport.

Beloit is a great place for students who want close interaction with faculty, have varied interests, want to develop strong critical thinking skills and a sense of agency and want a tight-knit campus without a lot of outside diversions. 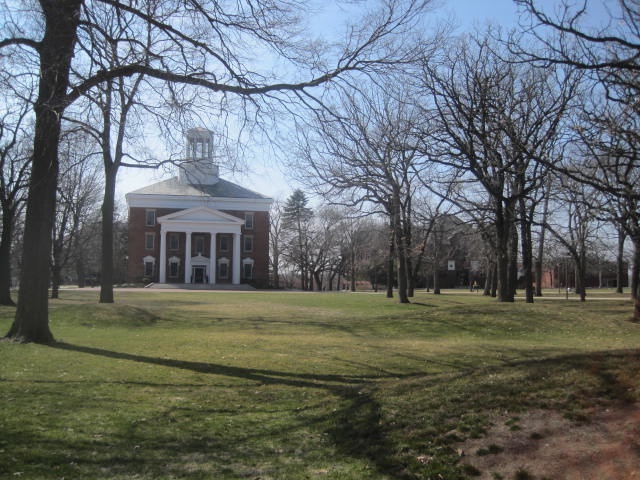