UCLA is a beautiful terra-cotta colored brick campus set between three exclusive LA neighborhoods, Bel Air, Brentwood, and Westwood.  Westwood Village is right outside the campus with a plethora of movie theaters, restaurants, shops, and bars.  The Big Blue buses drive all over campus and help shuttle students around.  Fraternity and Sorority row are on opposite ends of the campus.  Given its size, UCLA feels like a world unto itself.  It sports a beautiful sculpture garden, multiple libraries, theaters, and athletic facilities. The dorms sit high on a hill and thankfully the weather is almost always beautiful, so students definitely get a workout.  Most students live on campus the first year and move off campus to the Greek houses or local apartments. It is also not uncommon for students to commute during the later years.

We were there during lunchtime on a gorgeous sunny SoCal February day.  The 27,000 undergraduate students were out in full force!  The main corridor that connects North and South Campus felt like NY Penn Station during rush hour.  However, the rest of the campus was open and airy with students eating and studying outside.

Our tour guide was enthusiastic, articulate, and loved her experience at UCLA.  She enjoyed the many opportunities that came with a large campus.  She was also in a sorority. She said that while the classes are quite large, she has also had some smaller classes.  The largest class can be up to 300 students, but Teacher Assistants offer smaller study section where students can ask questions. Steps between North and South Campus

Admissions to UCLA is highly competitive, but in the last three years, more slots have opened up for students from out-of-state and international students. In previous years, the out-of-state population was less than 10%, however last year it reached 18%.  Going forward they have limited the number of out-of-state/international slots to 20% of the class. They receive approximately 80,000 freshmen applications and 20,000 transfer applications!  To handle the large numbers, Admissions hires numerous outside readers to give a thorough read of every application. The most important quality that admissions looks for is a student’s ability to overcome challenges to become a high achiever.

UCLA looks at the unweighted GPA first and then they add back points for honors and AP/IB classes.  However they do not give extra points for 10th  grade H English, Biology H or Algebra 2 H. They only look at grades from courses taken in 10th and 11th grade.  They also do NOT superscore the ACT or SAT.  UCLA admissions wants to see strength and rigor and that students are progressively challenging themselves and maintaining sustained participation in activities that develop academic and intellectual abilities.

I asked about the rumor that students were not able to graduate within four years due to inability to get classes.  They said that on average students graduate in 4 years and 1 quarter.  (UCLA is on the quarter system, 3 quarters, 10 weeks each). TFT as it is known, (UCLA is filled with acronyms, a hallmark of a bureaucratic institution!)  integrates theater, film and TV under one school.  As a result there is a lot of collaboration among departments.  This is one of the smaller schools at UCLA with a total undergraduate population of 294 students broken down as follows:  Acting 94 students, Musical Theater 63 students; Design/Production 66 students; General Theater 34 students; Directing 11 students; Playwriting 14 students; Teaching Artists 9 students.  Admissions is highly competitive.  In 2012 46/564 students were accepted into acting; 23/205 accepted for musical theater and 18/106 for Design/Production.

The Film program is top notch given its proximity to Hollywood. Students take a foundation year and then concentrate in Production/Direction and Animation or Screenwriting during their final year. They offer film degrees in Narrative Filmmaking, Production/Direction, and Cinematography.  All students in the film major make a film; they have to fund their film, but they also own the rights to the film upon completion.

The Office of Disabilities provides services to students with hearing impairment, physical impairments, ADHD, Aspergers, Mental Health, and brain injuries.  UCLA will go out of its way to accommodate for students with disabilities including note takers, assistive technology, extended time on tests, etc.  They prefer that students disclose after they have been admitted.  They do not take this information into account during admissions. UCLA is an excellent option for students who want a big school in a beautiful location and have the ability to take advantage of the numerous opportunities available to them.  UCLA offers something for everyone from a gorgeous campus, to a big rah, rah experience, top-notch academics and talent based programs, thriving Greek life, and access to a world-class city. 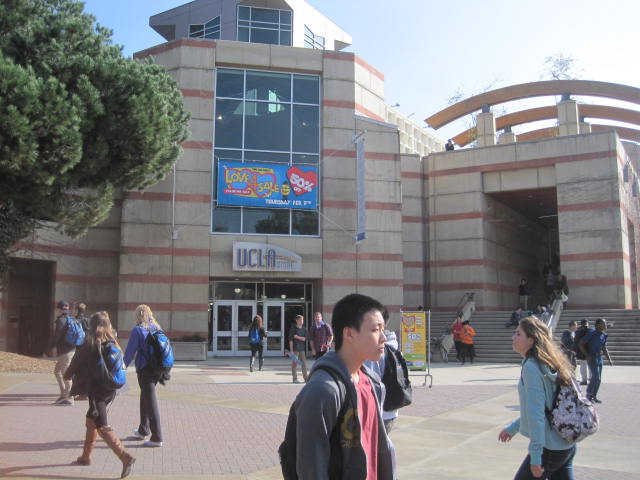