We arrived on Colgate’s campus just as the snow was starting to fall. The campus was just as beautiful as I remembered and my daughter, Kayla, was also impressed with the beauty of it. We did a quick drive through before our tour the next day. Students had just arrived back from winter break and were excited to see each other.

We had dinner that evening at the Colgate Inn, a lovely hotel and restaurant in the quaint town of Hamilton next to campus. The town consists of a bookstore, several restaurants, a few shops, a café, and an ice cream store. It is a few blocks from campus, but other than that, there is not much outside activity, however there is a lot going on on campus and students have a strong sense of community.

We toured the next day and thankfully the snow had stopped. Preppy, attractive, students wearing Moncler and Canadian Goose coats and LLBean and Columbia snow boots surrounded us as we walked around campus. The students we met were friendly, ambitious, academic, and engaged. As we walked to the Coop, one of the main campus centers, we chatted with some bio-chemistry majors. They loved the school, but both complained about the difficulty in getting science classes and one, who was pre-med, even worried that he may not get the classes he needs to graduate in four years. I asked other students about their ability to get classes and their answer largely depended on their major, however most said that professors are good about letting students in. Students register using a lottery system and each semester get a registration number between 1 and 4.  It changes each semester to make it fair.  So the biggest issue in registration is for freshman and sophomore science students who get a high lottery number as juniors and seniors get preference.

Before our tour, we had a chance to speak with Jake, a sophomore from our hometown. He loved his experience at Colgate and enjoyed the rigorous classes and strong interaction with professors. He had just attended Sophomore Connections, a fabulous networking event, where approximately 150 Colgate alumni come back to campus to talk about career paths. He met two people that worked for National Geographic and convinced him to change major from economics to either geography or international relations. He likes how courses are taught in those subjects as they professors are more engaging and not jut lecture based.

The students who spoke during the information session were equally engaged and impressive: Susan, a senior from Dallas was majoring in international relations and minoring in film and media studies. She was involved in a sorority, club rugby and served as a volunteer to assist local residents with their taxes. She credits her close relationship with her professor that got her involved in the tax program. Susan studied abroad in Geneva and while there interned with the United Nations. She received a $4,500 grant from Colgate to work in Thailand over the summer.

Jake a senior from Long Island was very involved in Jewish Life (Colgate Jewish Union, the Jewish Philanthropic Group, and the Israel Group) as well as the Colgate radio station. He studied abroad in Florence, Italy.

Colgate Study Group is an extended study program attached to a course. Students apply for these courses, which marry study on campus with a three-week travel to a specific country. Some examples include going to Buenos Ares to look at their financial systems, studying comparative religions and going to Israel, or studying the political system in Turkey culminating in a trip to Istanbul. These programs are competitive.

Sophomore Connections a program designed for sophomores to meet alumni and network around career interests. Colgate is known for an excellent alumni network and career services.

National Institute of Health (NIH) Semester. Colgate is the only university that offers this exceptional program where 18 students take classes with Colgate cohort and Colgate faculty member in Washington DC. They work on semester long research projects at NIH labs.

Summer Research Grants Colgate funds approximately $750,000 for its students to conduct research over the summer.

The first time I visited campus, Greek life dominated the social scene and took up a lot of the conversation. Greek life represents 32% of the total student body, however students do not rush until sophomore year, so roughly 42% of eligible students participate. This time, our tour guide discussed some non-Greek and non drinking related activities that have become more popular and available on campus. There was also a lot of talk of inclusion and a concerted effort on campus to make social life more accessible to a wider range of students and interests.

Admissions takes a holistic approach. They of course look closely at high school transcript and scores, but also look carefully at letters of recommendations to determine what kind of leader are you? What is your involvement? Given the strong community and need for students to take on a leadership role on campus, this makes sense.

My Daughter’s Take: The students seem nice and normal and the campus is beautiful, but it’s too isolated for me and there are not enough good food options. I like it, but not sure if it’s for me.

College review by Lisa Bleich (10/10)
Colgate is a beautiful, gray stone campus that sits atop a hill overlooking a valley full of trees.  Colgate boasts that it ranks as number two for the most “fit” student body, which is not surprising given the many hills that students walk from dorms to classes or from the library to the academic quad.Colgate has a four required types of courses including Legacies of the Ancient World (Plato, the Bible, the Kuran, etc.); Modernity (which covers Darwin to the 20th century); Community and Identities; and Scientific Perspectives. Students are also recommended to experience a global engagement.  The Dean of Faculty described the 13 types of learning that students are encouraged to pursue, which include critical thinking and knowledge of a foreign language among them.  However, when I asked the student panel if they knew what the 13 requirements were, they had not heard of them, but thought that they had accomplished them nonetheless.

Colgate is a contained community as the town of Hamilton (not to be confused by the college Hamilton) is an integral part of their campus.   The two block town houses the Colgate bookstore along with a couple of cute coffee houses and shops.

While the college is remote, there are a lot of activities organized for the students.  Colgate is a Division I school, with Hockey being the most active sport.  “The Hockey Games are insane!” One interesting course is called Living Writers, where students read a book by a living author each week, discuss it on Tuesday and meet with the author on Thursday.  These meetings are also available through webinars for students studying abroad or parents to view.  DanceFest is a popular event on campus, which brings together all of the dance groups for a school-wide performance.  They also bring a lot of speakers to campus, e.g. Bill Clinton, Dalai Lama.

Greek life represents a large part of the social life, as do local bars for upperclassmen. Students work hard and play hard. A previous incident of over drinking by freshmen had been blamed on the fraternities.  Depending on whom you speak with, this is more or less true.  Everyone though was in agreement that the Greek life is under scrutiny. Students are actively discussing what the right number of fraternities and sororities should be and how active a role Greek life should play.  (The college recently eliminated one of the sororities, however there is a lot of demand to bring it back.)

While the predominant look on campus is J. Crew and preppy, there was a nice mix of students.  Our tour guide was from Los Angeles and was very active in the Jewish Student Union.  Another young man that I spoke with was from New York, sporting a pink button downed shirt and khakis.  He was in a fraternity, she was not.    The political culture is moderate with a good mix of conservative and liberal students.

Colgate students describe themselves as active and engaged.  They are driven, intelligent, social and open to new experiences.  Students must get involved to be happy on campus because there really is not much else to do outside of campus.  On the plus side, it helps form a very cohesive community.

Colgate is a needs “aware” school and approximately 40% of students receive financial aid.  This means that students who do not have a financial need may have an advantage.  Colgate is highly select and the student’s intellectual engagement reflects this.

Colgate is great school for a student who wants a rigorous, liberal arts environment with Division I sports, enjoys interacting with a tight-knit community, and would be happy in a rural location. 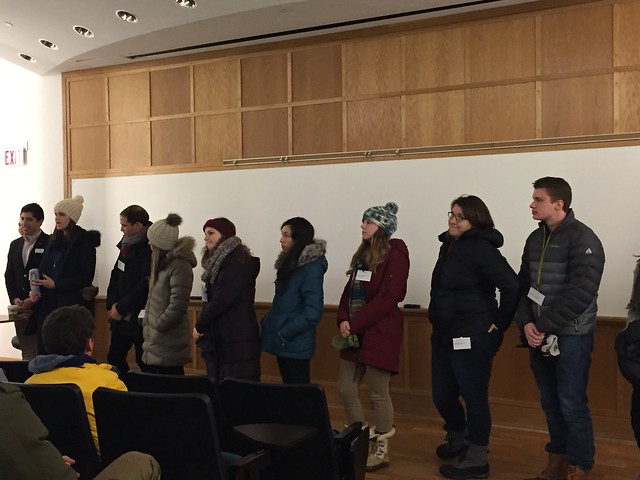