I went back to Emory to visit with my youngest daughter.  We arrived in Atlanta a couple of days before our scheduled tour, giving us the weekend to explore the city.  We stayed right near campus at the Emory Conference Hotel and got a much better sense of life in and around campus.  While the campus itself is very pretty and self-contained, some of the dorms have one side facing a main street across from the hospital and other medical facilities. However, the other side faces the campus. By foot, Emory Village is right outside campus and there is also a new center within walking distance with a Whole Foods-like grocery store and other restaurants and retail stores. We went out to dinner both nights with current students about a ten-minute drive from campus. Atlanta, as a city, is very spread out and requires a car to get around because there is not great public transportation.  So kids who made friends with upperclassmen with cars seemed most content because they were able to access the numerous cute Atlanta neighborhoods.  (Students also use Uber a lot.) The Highlands area, in particular, is a cute town with lots of good restaurants and shops. Socially joining Greek life or a sports team is essential.  In fact our California friend had just joined a sorority as a sophomore to expand her social life.

Academically, students are engaged and have close relationships with professors. My daughter had e-mailed a professor who taught The History of Television on Saturday afternoon to see if she could sit in on a class.  Professor Aidman responded within an hour giving her information on the class along with an assignment to prepare for it.  They went back and forth with a few e-mails and my daughter was impressed with how responsive she was.  The assignment was to watch a video of the Nixon “Checkers speech” and read an article about the Quiz Show scandal.

That Sunday we spent the day in the library working and got a good sense of the atmosphere on campus.  The library had lots of comfortable nooks to sit and study and was filled with students deep in work.

Admissions stressed the importance of intellectual curiosity among its applicants.  In fact, the supplemental essay question changes each year to get at how intellectually engaged students are.  Admissions does NOT track demonstrated interest or visits. They figure if you have applied, you are interested!  Overall admissions wants to first know, can you do the work?  They gauge that by the rigor of your high school curriculum and how well you did.  Next they want to know how will you contribute to the campus.  They want students who can do the work and impact the community in a meaningful way.  Letters of recommendation also factor into the decision. While they do look at test scores, it is not the most important part of the application.

I like it.  The campus is pretty.  The kids seem pretty happy and I liked how responsive Professor Aidman was.  I’ll definitely have to join a sorority, which is fine.  I just wish there was a nicer area right around campus.

My daughter and I took a post-Hurricane Sandy break and spent the last few days in Atlanta, GA visiting Emory University and Georgia Tech. For our first exposure to Emory, we met up with one of my colleague’s students, Morganne, who let us sit in on her Statistics class (a prerequisite for all psychology majors).   As we waited for her on the outdoor patio outside the DUC (the main student cafeteria/student center), a student had just received her new iPhone 5 and was excited, claiming, “this is the best day of my life!”  (Having received mine a couple of days ago, I could relate to her glee!)

Morganne was extremely welcoming and gave us a tour of the campus en route to class.  Students filled the lecture hall, chatting excitedly. The professor came in and students continued their animated conversations.  The lecture hall was filled to capacity and students sat along the stairs and in the back.  Many had laptops, smartphones, and pre-printed power points.  The hall quieted about 3 minutes into the lecture.  The professor put up a print out of various data points and asked the students to identify the P value.  She continued discussing A Novas, P Values and other statistical markers.  She then showed how to apply it by looking at a recent psychological study on how much the region of country that a male comes from impacts his reaction to being bumped on the shoulder by a stranger.   She compared the bump to rise in testosterone level among men from the South, West, and Northeast, with the hypothesis that men from the South would be more upset by being bumped.  The second variable she examined was whether the man being bumped would react stronger if the person who bumped him yelled, “asshole” after the bump. (It turns out the Southern men do react more to being bumped, but there is no statistically significant rise in testosterone when the person yells asshole afterwards!)  While students quieted down and gave her their attention, the level of interest seemed mixed.  The student next to me was checking her e-mail, some young men in the center were rapt with attention, and as we left 15 minutes early, we noticed some boys in the back on Facebook.

We left after our class and both of our reactions to the school was mixed.  We came back the next day for an information session and tour.  Our tour guide, David, was majoring in Anthropology and French and hailed from North Carolina.  He rowed club crew and was also involved with admissions and residential life.  He was not a member of a fraternity and he said that it did not impact his social life at all. About 30% of students participate in Greek life, but it does not seem to dominate the social life. (This pleased my daughter.) As we toured the campus the second time, we had a much better feel for the school.  The campus is very pretty with white washed, modern buildings and red tiled roofs.  It has a Southern California feel.   The student body is highly diverse, attractive, engaged, fit, friendly, and well groomed. Many of the girls sported jeans, boots and scarves and the boys seemed clean cut in jeans and shorts. They also seem very happy.  Given its location, Emory is often referred to as Coke University since its endowment was largely built on an initial donation from the former head of Coca-Cola.  The campus does not lack for any comforts with a state-of-the art performing arts building, recreation center (including a rock wall and Olympic size swimming pool), Town House style living with an outdoor swimming pool and laundry service for upper classmen, 2 sustainability dorms, and a hospital and the Center for Disease Control (CDC) right on campus.  The hospital is ideal for nursing and pre-med students. Emory village abuts the campus with the requisite Starbucks, Panera and other shops.

Our tour guide told us about several traditions on campus.  There is a “secret society” with a Dooley, the mascot, who randomly enters classrooms and if he does, then the class is dismissed. They also have “Wonderful Wednesdays,” with free food, music, and club activities in the center of campus.

Emory has a great nursing program, which students do not enter until their junior year and surprisingly the majority of the nursing students do not start off at Emory for their first two years.  The average nursing GPA is a 3.4. Some other stand out programs are the SIRE Scholarly Inquiry and Research at Emory where students have a lot of opportunity to do research and study abroad, the Global Medical Brigades where students go abroad and set up clinics, and the 3 +2 Engineering program in conjunction with Georgia Tech.

There are two points of entry to Emory University, Emory College and Oxford College, a two-year program with 900 students located on a separate campus about 45 minutes away. Students can apply to either or both.   All Oxford students come to Emory for their junior and senior year, but they must complete their first 2 years at Oxford. The average GPA is a 3.8 out of 4 with a rigorous curriculum.  Emory looks for active, engaged students who will give back to the community.

2/3 of students receive needs based aid (they meet 100% of demonstrated need) and Emory has a strong merit program called Emory Scholars.  These are very competitive and students must be nominated by their high school guidance department in order to apply.  Students can self-nominate for Oxford scholarships.  Emory Scholars candidates are typically in the top 5-10% of their class and have a 33 ACT or 700 + on every section of the SAT. They must also have some type of awesome extracurricular activity that really shines.  Last year there were 2,200 nominations for 300 awards.

Emory is a great school for students who want an involved, social, hard working, attractive/well groomed, diverse student body with a pretty campus right outside of a major city.

My daughter’s take:  I really liked it, especially after we came back the second day and took the tour. The kids seem really happy and speak about their experience with passion.  I could see myself here.  I am definitely going to apply. 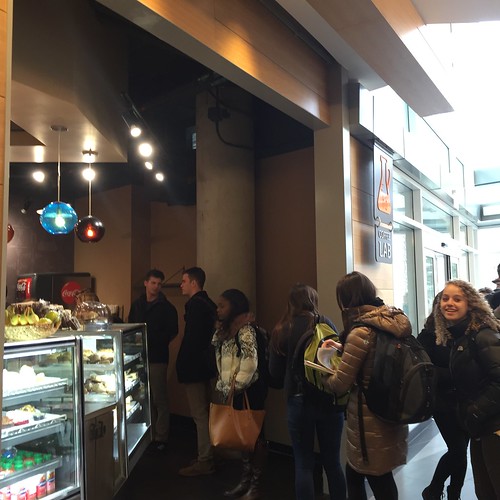