Georgetown oozes history and tradition — the school colors are based on Union and Confederate uniforms, President Obama just gave a speech from the same podium as did George Washington, and acceptances still come by letter because “formidable news warrants proper documentation.” But it also feels progressive (especially for a Jesuit school) with a large and active LGBTQ Resource Center and plenty of social justice/action. The school works hard to live up to the Jesuit principles of reconciliation, inter-religious understanding, community of diversity, “women and men for others”, and cura personalis. The kids I spoke with told me that the school feels like a close-knit community and even the recent election didn’t cause too much tension. Republicans and Democrats both appear to be well-represented on campus. All three of my guides were seniors and teared up as they spoke about graduating. Amanda was studying art history at The College (Arts & Sciences), Jess was studying marketing and business analytics at the McDonough School of Business, and Sarah was a Science Technology & International Affairs major in the Walsh School of Foreign Service. All felt very at home at GU, all had studied abroad, all were heavily involved in community service, and all had done multiple internships. There’s also a ton of fun to be had at GU — lots going on on campus, fantastic college town, great city, and lots of Hoya fandom. We arrived at Georgetown campus on a gorgeous spring Wednesday afternoon. The sun glistened on the large grassy quad peppered with groups of students engaged in animated conversation while they enjoyed their delicacies purchased at the weekly Wednesday farmer’s market. Food stands covered the area to the left of the quad. Energy and chatter permeated the campus.

The students looked happy, attractive, diverse, engaged and excited to be there.  Jaime from admissions described Georgetown students as sociable, friendly, sharp, and outgoing.  Those adjectives definitely described our tour guide who came from Harrisburg, PA and recently declared her major in public health.  She confidently led us around campus showing us the various buildings and living options which include cute, brightly painted brownstones right outside of campus to apartments atop a narrow metal staircase with breathtaking views of the city.  We continued on to the newest student center with seating scattered throughout, a cozy fireplace, and large windows making the space light and welcoming.

Student are actively engaged on campus from participating in community service and internships or attending one of the numerous speakers or performers who come to campus. Approximately 150 students participate in “The Corp,” an organization of student-run businesses ranging from a café to a storage center to an on-campus supermarket.  The Corp gives students an opportunity to get real world business experience from the ground up.

Our tour guide said that while some of the activities are competitive to get involved with, everyone ultimately finds his or her place on campus.  She also talked about how she loved being on the “Hilltop” because students enjoy debating and talking about real issues.  She found her classmates to be as passionate about making a change in the world as she was.  She felt she could have real conversations with real people.  There is no Greek system on campus because Georgetown believes in fostering an inclusive community.

Georgetown seeks students that look inward and think about community.  This aligns with its Jesuit traditions to educate the whole person.  The idea of a common community is also a big part of the Georgetown philosophy so they look for students who will be able to step into the community and actively contribute.

There are about 6,400 undergraduates and they admit a class of 1,580 freshmen.  Admissions is highly select. They offer Early Action and Regular Decision.  Early Action is only recommended for the most select students. Admissions likes to see three SAT subject tests because they find it very useful to know that students have good test scores.  AP scores can also help if they are good.  However, they have admitted students with only two SAT subject tests.

For 2016, Georgetown admitted 13% of the Early Action applicant pool and on average they were in the top 2% of their graduating class!  Approximately 30-35% of its class comes from Early Action applicants.  Georgetown has its own application and has no plans to make a change.  The larger the high school, the more important the rank is for students.  Georgetown’s EA program prohibits students from applying elsewhere under a binding Early Decision plan.

The average SATs were 690-780 critical reading and 700-770 math.  The average ACTs were 32-34. Georgetown does not take legacy or athletic recruits into account for Early Action applicants, but they do for Regular Decision.  They rarely send a likely letter unless they are competing with an Ivy League contender during Regular Decision. Georgetown admitted 16% of its Regular Decision applicants in 2016.  On average they were in the top 3% of their graduating class with SAT scores ranging from 680-780 in critical reading and 680-770 in math and ACT scores ranging from 31-34.  35% of the class were underrepresented minorities.  Approximately 10-15% of applicants who were deferred during Early Action will get accepted during Regular Decision.  If a student is on the cusp, an admissions counselor may remember that he read the student’s application during the early action round and that Georgetown was the student’s top choice.

Georgetown also enrolls between 100-150 transfers for whom admissions is not as select as for freshmen. Their retention rate is 97%, but because so many students study abroad there is room for transfers.

Students must apply to one of four colleges below. They are not considered for any of the others.

Students cannot double major across schools, but can minor across schools.  Contrary to popular belief, the schools are equally competitive and admissions cares about fit and your ability to communicate that fit. Faculty also take part in admissions to help determine an applicants’ overall ability to contribute to the academic environment.

Georgetown is need blind for all students including undocumented students.  They also offer a Community Scholars Program for first generation students that brings them in for five weeks during summer and shepherds first generation students through Georgetown during the four years.  For this cohort, admissions looks beyond grades at resilience to make sure they will be successful.

We visited Georgetown and the other schools on our DC tour through the lens of International Relations.  We had the opportunity to meet with the Dean of the School of Foreign Service.  SFS provides a rigorous undergraduate education in IR theory and practice while instilling the value of service to others.  Their goal is to teach not only learning, but also discovery.

SFS offers a liberal arts degree with global focus; students receive a BS in foreign service with eight choices of concentrations. In addition to Georgetown’s core curriculum, students in SFS must also take four semesters of economics, three semesters of history, two semesters of government as well as become highly proficient in a modern spoken language of their choice.  Students are tested orally on this language in order to graduate. It is more difficult to transfer in to SFS than to transfer out. Fewer than 30 students per year transfer in. And many transfer in from other colleges such as Middlebury, George Washington, or William and Mary. The few that leave are mostly due to the language requirement. SFS wants students who can effectively engage in commerce or education orally in a foreign language.

For admissions, they want to know that you have identified a theme and interest in a big picture and global arena.  Identify a global issue that has piqued your interest and share with them what you would do about it along with a demonstrated commitment to language.  Many students participate in Model UN, Junior Statesman or Yale Global Scholars, however they do not require it. Students also need a commitment to service because service is huge on campus.  If they don’t have it, it will be hard to integrate into the community.

Most SFS graduates go into business, public service or consulting upon graduation.  Consulting and Financial services employ about 40% of the graduating class. They appreciate the global awareness and focus of SFS students.

Georgetown is an excellent option for highly driven, outgoing, engaged, service-oriented students who thrive in an active, energetic, environment at the center of Washington DC. 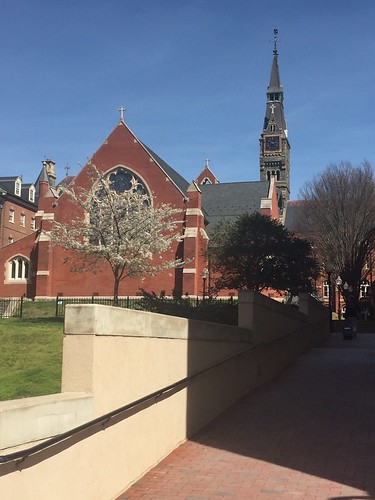