Lisa and I (along with a group of independent counselors attending a conference in Baltimore) toured Johns Hopkins University one week after riots rocked the city of Baltimore. The campus was relatively quiet as students were preparing for finals. The backdrop of the recent unrest led to an interesting conversation about community and JHU’s relationship with greater Baltimore.

Whether involved in the local tutoring program on campus (Baltimore students are bused to campus weekly), Habitat for Humanity, or, at a more macro-level, Engineers without Borders, Hopkins students are involved in service to the community. Hopkins is located in one of Baltimore’s neighborhoods (Baltimore is described as a city of neighborhoods) and most juniors and seniors live off campus, typically within a three-block radius of campus. The importance of connecting with the community was emphasized over and over again during our time on campus. Taking advantage of internship opportunities and cultural events is encouraged and a planned expansion of the city bus system to include a stop on campus will make access even easier.

When asked about campus safety during the recent riots, we were assured that the unrest never reached the campus (safety officers beefed up their regular patrols of campus and areas off campus). There were limited demonstrations on campus showing support for the greater Baltimore community.

Academics at Hopkins are rigorous and students who thrive are attracted to the dynamic, research-intensive environment. 1/3 of students study Engineering, 1/3 Sciences, 1/3 Humanities. 1/3 of students pursue a pre-med track in addition to one of the above academic disciplines. 60% of students double major, 70% have at least one research experience while at Hopkins, 85% have done research or had an internship before graduation.

To reduce stress and to introduce students to the rigor, first semester freshman grades are “covered”—grades of a C or above are recorded but are not part of the GPA calculation.

Biomedical Engineering is the only closed major. Freshmen must indicate their intent to study BME when applying. Students can be accepted by the University and not into the BME major.

Academic fit, impact or initiative outside of the classroom, and personal fit are the primary factors considered by admissions.

Transcripts, letters of recommendation, and standardized tests are used to assess academic fit. The most rigorous courses are expected, SATs and ACTs are super scored, and Subject tests are not required but are encouraged for students interested in Engineering or the Sciences. Letters of recommendation should highlight what the student brings to campus. They are looking for dynamic doers and leaders.

Hopkins took 40% of their class ED this year and ED acceptance rates were 35-40% as compared to RD acceptance of 12-13%. JHU meets 100% of demonstrated need and does offer merit scholarships of up to full tuition for top candidates.

The strong medical/healthcare vibe at Hopkins was well articulated by our tour guide Gabe. He shared that even students who are not pre-med are typically involved in heath care in some way. For example as an Electrical Engineering/Computer Science double major, his area of interest in cyber security in the healthcare field. When asked about political activism on campus, he jokingly responded that the biggest uproar would happen if the NIH announced cuts to healthcare spending.

Last week I spent the day at John’s Hopkins University.  This was the first tour that I took with my daughter who is currently a junior in high school.   Below are her impressions as well as my own. I’ve italicized her comments.

We spent the morning trekking around campus in the pouring rain. We met one of my former students and he gave us a tour of the campus, which consisted of looking at the somber and traditional brick buildings while we trudged through piles of wet leaves and rivulets of muddy water. Of course thinking that it would be nice weather neither of us was properly attired for the excursion.

Johns Hopkins is a very attractive school in terms of aesthetics and we both enjoyed our tour.  There is a main quad area with a staircase atop that displays posters of upcoming events.  There are numerous guest speakers, concerts and events sponsored by the University.

Students on their way to class

We sat in on a class called Professional Communications, which fulfills one of the four writing intensive course requirements for students.

Approximately seventeen students sat around in a square configuration typing on their laptops, while the teacher wrote questions up on the board at the start of class.  Students had written a grant for a mock non-profit organization to address an issue of their choice in a developing country.   Some of the issues addressed were cleaning up toxins released from the Leather industry in India to improving the higher education system in Nigeria.  This particular class was run as a workshop to provide feedback for the students’ grant proposal. Students were more or less engaged in the process but it was clear that most of the students were science math majors for whom writing was not their first love.  Students bantered with each other and the teacher.  One student quipped, that the key to writing a successful grant was to make the paper as boring as possible, in fact his was so boring that he couldn’t read it anymore.  All of the students, including the instructor laughed.

One of the more popular writing intensive classes is Introduction to Fiction and Poetry. Hopkins has an excellent creative writing and English department and surprisingly many pre-med students double major in writing seminars to round out their profile. Most classes are taught by teaching assistants or professors with a masters in fine arts.

The library has multiple levels both above and underground.  Each floor has a different level of noise, so students can choose a floor based on how much quiet they need to study.  There are also numerous meeting rooms for kids to form study group, which is particularly popular to solve problem sets in the sciences.

After class we had lunch in the fresh food café, which featured an array of standard college fare. There was even a kosher section in the main dining hall.  Students who kept kosher appreciated being able to eat among all of their friends. We had lunch with two students, one a science major the other an English major. They said that students at Hopkins tend to fall into two categories: those who study all the time and spend most of their time in their dorms and those who like to be more social. Surprisingly both do equally well academically.  The Greek life is also fairly popular, but student do not rush until spring of freshman year.  Fraternities are off campus and Sororities do not have houses.  Sports are also a big part of the social life, with Lacrosse very strong.

Both students described the environment as competitive and intense, but they enjoyed the school very much. Studying primarily takes place during the week with the weekends more geared towards relaxing.

Freshmen primarily live in the freshman quad and sophomores in the sophomore area, most sophomores have singles, and juniors and seniors predominantly live off campus.

The most competitive major is bio-medical engineering followed by sciences, international relations, and the humanities. The student body is ethnically and racially diverse with a very strong Korean and international population.   Students seemed to be serious, but happy and there seemed to be a strong sense of community among the students.

There is a small town across from the school with a Barnes and Noble and a few scattered shops. The Baltimore Art Museum is around the corner. Campus safety maintains a very strong presence on campus and students feel safe and acknowledge that an escort service is just a phone call away. However, the area becomes sketchier three to four blocks outside of the campus in either direction.

Hopkins is a great school for students who are strongly focused on academics, want a multi-cultural environment, and want to be near a big city. 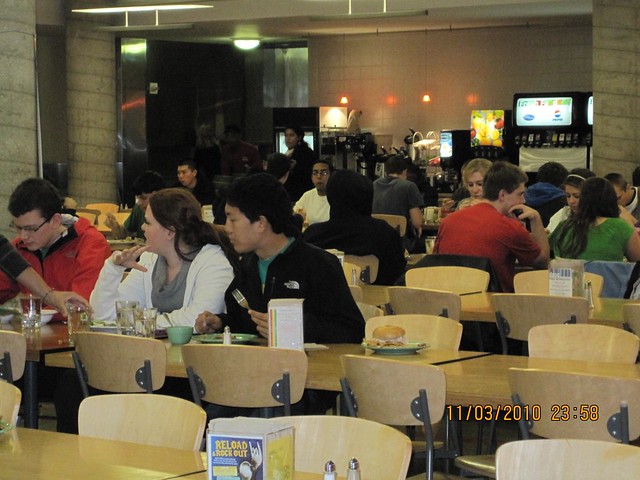