The Kenyon campus is beautiful with English Gothic architecture throughout the campus.  The campus is spotted with pretty sculptures and interesting, architectural detail throughout.  There is a “middle walk” that cuts through the campus, which creates a central place for students to see each other as they walk across the relatively cloistered campus.  Gambier, which sits right on the edge of campus, is tiny (population 5,000).  It consists of the Kenyon bookstore, a post office and a coffee house.  Students complained, however that there was no central meeting area or student center to get food after midnight.

We started our tour with a lunch in Pierce, the student cafeteria where the lobby was filled with students chummily lounging in the comfortable couches.  The main speaker at the breakfast was one of the English professors.  He had an impressive academic background (Yale college and graduate school).  He taught at Harvard four or five years before coming to Kenyon.  He said he was attracted to Kenyon because students at Kenyon focus on ideas and not achievement.  Students also receive incredible one-on-one feedback from their professors on their writing.  Some professors actually sit with a student and go over their paper line by line until they understand how to create excellent prose.  While Kenyon is known for its excellent writing, the sciences are equally strong.

Unfortunately, we were underwhelmed with the student panel.  While all of them were clearly accomplished and bright, they came across as flat and almost too laid back.  (Perhaps it was because the weather was gorgeous outside and the last thing they wanted to do was speak to a bunch of counselors!)  One student was a studio art and art history major involved in a coed, community service oriented fraternity; another was an economics major very involved in his fraternity and heading to Case Western Law school in the fall; the third was very sweet sociology major from Texas, who was very involved on campus in student government and hoped to work for Teach for America.   The final student was a very low-key, but intelligent young man majoring in math and chemistry with a strong sense of community.

In spite of our low-key student panel, it did come through that Kenyon students put the greater community ahead of their own needs.  For example, one of the students talked about how in the higher level math classes he feels a responsibility to come to class prepared with all the problems because his classmates and professors are counting on him to participate and he doesn’t want to let them down.

This sense of community was also apparent throughout campus from the students chatting enthusiastically in the cafeteria lounge, to sitting together in clusters on the grassy quad as Frisbees floated across the lawn.  For example, students are not supposed to talk on the cell phone or listen to music on earphones as the walk down the “middle walk” to ensure that students are open to the community.

Amazing does not begin to describe the new, state-of-the art $71 M athletic facility.   There was a pick-up basketball court, Olympic size swimming pool (Kenyon has won the DIII title 31 consecutive years until this past year where they lost to Denison), multiple aerobics studios, a smoothy bar, indoor track, and a beautiful outdoor track.  Kenyon has exceptional DIII athletics, which was apparent by the outstanding facilities.

Kenyon is a great place for quirky, sporty, laid-back, ideas driven, community oriented students who love to write and would be okay with an isolated campus. 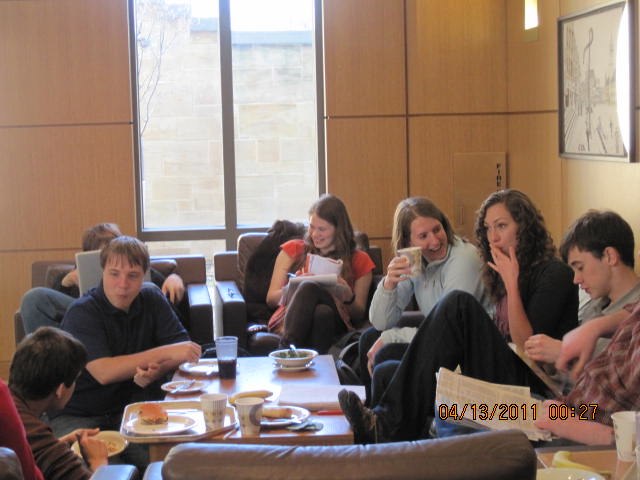