We arrived at the University of Michigan on a Friday afternoon around 5:30 on a beautiful spring day.  We passed by the “big house” (stadium) and let me tell you it is one big house!!!  We parked in one of the many lots near campus.  We ambled around central campus taking in the many students enjoying the weather sitting on the grass or enjoying one of the many hammocks dotted across the quad area.  Students looked relaxed and happy; it was the last day of classes before reading period and finals.  Students seemed to represent all types of kids from artsy looking kids with tattoos and purple hair to students in Michigan wear to girls wearing cute sundresses to a group of sorority girls with matching straight hair and stylish sneakers. We made our way to Main Street with tons of restaurants, cafes and shops including a delicious bubble tea shop that quickly became our favorite haunt.  As we passed by one of the bars, we overheard a zealous young man proclaim to his buddies: “Free beer is my favorite kind and my second favorite kind is cold!”  Cantina’s patio was filled with people enjoying happy hour and all you can eat nachos.

We walked back through central campus on our way to meet our friend Jenn, a senior majoring in public policy in the Ford School and minoring in business at Ross.  We met in front of one of the two art movie theaters right outside of campus on the corner of State and Liberty.  Central campus spills into Ann Arbor and the two are inextricably and delightfully linked.  Ann Arbor is a bustling, quintessential college town with equal parts fast food joints and more upscale restaurants.  There we had dinner at a Korean Noodle Shop (the other half of the restaurant was a Korean BBQ).

Jenn gave us a private tour of campus.  We walked past the two art museums and through the law school quad.  The law school looked like something out of England with a large central quad surrounded by beautiful, gothic architectural buildings.  Inside, the law library had sweeping ceilings inlaid with stained glass and numerous inviting tables to study.  As soon as we walked out of the law school quad, we saw what looked like Emerald City (although with a slightly pink tinge) in front of us as the Ross School of Business shined brightly in across the way.  Its modern architecture contrasted dramatically with the law school.  The inside of Ross is equally impressive with tons of study conference rooms and leather chairs throughout the large open space.  We walked into the Singapore Student Association’s meeting.  Jenn seems to know people everywhere we went from her various activities on campus.  She mentioned that, while she had to apply and be accepted to minor in business at Ross, students who did not major in Ross did not enjoy the same level of career support and options.  She was excluded from on campus interviews or even being allowed to enter her resume into the recruiting system as a non major.  While she liked the classes at Ross, she felt that the Ford School of Public Policy fostered more of a sense of community among its student body.

As we walked back through central campus, we saw some sorority girls and their dates en route to their formal.  In the main student center there was an award dinner for astronomy students. Jenn said that Michigan offers massage chairs and sun lamps to help student relax and get some light during the cold winters.  When we dropped Jenn off at her house right near the School of Nursing about 5 blocks from campus, her friends were enjoying a back yard bonfire and s’mores.

The next morning, my daughter met a friend for breakfast at Sava’s while I toured the North Campus.  The North campus is about a 7 to 10 minute bus or car ride away from central campus.  Many freshmen live there.  It also houses Stamps School of Art and Architecture and the Engineering School.  You also pass the medical school en route.  North Campus looks more like an industrial park than a college campus, but what an impressive industrial park it is.  Stamps is massive with numerous studios, a woodworking workshop and galleries.  I peeked into the Senior Art Show on display in one of the galleries.

Across the way is the massive Engineering complex.  As I meandered around the engineering facilities, my attention drifted to the Electronic Music studio where students were in the middle of a recording session.  I glommed onto a tour for local 7th to 10th graders during engineering discovery day.  I chatted with two girl engineering students who were among the hosts.  They said that the engineering school is HARD!!!  One was a junior majoring in environmental engineering from New Jersey and the other was a junior majoring in computer science from Michigan.  The hardest class was data structures, but both conceded that now that they are in high level classes in their major it is more manageable.  The environmental engineering student considered minoring in Spanish and she said that while she probably worked as hard in her Spanish classes, albeit in a different way, the difference was that you could get an A with hard work in those classes, but in engineering, it’s near impossible to get an A.  But they were both excited about their job prospects.  The computer science major had an internship lined up with Salesforce and the environmental engineering major with GE Medical.

I picked my daughter up after her breakfast and we explored Ann Arbor a bit more.  As we drove out toward the airport we passed by Greek row and saw the various fraternity and sorority houses along with other stately manors along the way.  Both of us were impressed by the campus and its offerings.

My daughter’s impressions.  It’s big!!  I love Ann Arbor and the way the town and the campus seamlessly connect.  I know that I’ll find friends here because there are so many different types of people here.  The campus is really pretty and people seem smart and balanced.  It seems like it would be a great place to go to school.  My friend said that the football games are really fun and she wasn’t into football before she came.  I like it, but I’m just not sure if it’s too big or not.

Click here a student’s review from 2011.  The student ultimately chose Michigan and graduated from Ross Business School in May, 2015. 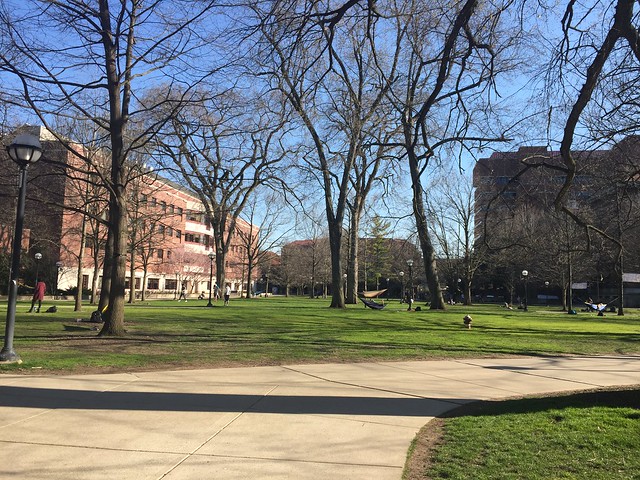