I spent last week touring several Ohio schools with a group of college counselors throughout the country.  Overall, the people in Ohio are extremely friendly and down-to-earth.  The Midwest really does have a distinct feel.  I also drove through Ohio State, which is a beautiful, large state campus right in Columbus.  We ate dinner in the “hip” part of downtown Columbus with a collection of restaurants, galleries, and shops.  Below is a description of all the schools.

OWU is small, liberal arts college outside of Columbus, OH.  The campus is pretty, but oddly configured.  Our tour guide, Michelle, from NYC, aptly described it as a dog bone with the academic quad on the one side and the residential quad on the other end and a skinny town in between.

Wittenberg: Student and Professor at work

We approached the beautiful campus from the bottom and looked up at a gorgeous green hill.  The campus felt very collegiate and peaceful.  Wittenberg was named after the city in Germany where Martin Luther, the founder of the Lutheran religion lived.  While Wittenberg is a Lutheran university, the student body was very open to other points of view, ideas and cultures.

The College of Wooster

I have always heard great things about The College of Wooster, so I was excited to see what all the hype was about.  I was not disappointed.

A student playing the bagpipe, dressed in full Scottish regalia, greeted us.   (Wooster is one of the few schools that has a bagpipe in their marching band and offers a scholarship specifically for students who play it.)

Oberlin is a music lovers dream.  As we walked into the new music building a student randomly broke out into song.  A world-class viola played in the background while we congregated into the recording studio. As we were leaving to go on tour, a trio of bases was jamming in the atrium.  Oberlin has 2400 students in their liberal arts college, 600 students in their world-renowned music conservatory and about 30-40 kids in a five-year joint degree that provides a BA and BA of music from both colleges. Students benefit from having so many musically inclined people in one place from TGIF lawn parties with students jamming on the lawn to the opportunity to attend one of the 550 concerts performed in a given school year.

The Denison campus sits atop a hill with a beautiful view of the town below.  I had the good fortune to sit next to a Japanese Professor, Michael Tangeman, who is part of the East Asian Studies department at breakfast.  He told me about the numerous opportunities for students to study languages at Denison as well as take advantage of study abroad programs.  Students who are more advanced in their studies, can opt to do a directed study with professors to pursue their language more deeply.  Denison recently hired a full-time Arabic professor (she was previously part-time between Denison and Kenyon), so they have a commitment to providing students with a large array of languages.

The Kenyon campus is beautiful with English Gothic architecture throughout the campus.  The campus is spotted with pretty sculptures and interesting, architectural detail throughout.  There is a “middle walk” that cuts through the campus, which creates a central place for students to see each other as they walk across the relatively cloistered campus.  Gambier, which sits right on the edge of campus, is tiny (population 5,000).  It consists of the Kenyon bookstore, a post office and a coffee-house.  Students complained, however that there was no central meeting area or student center to get food after midnight. 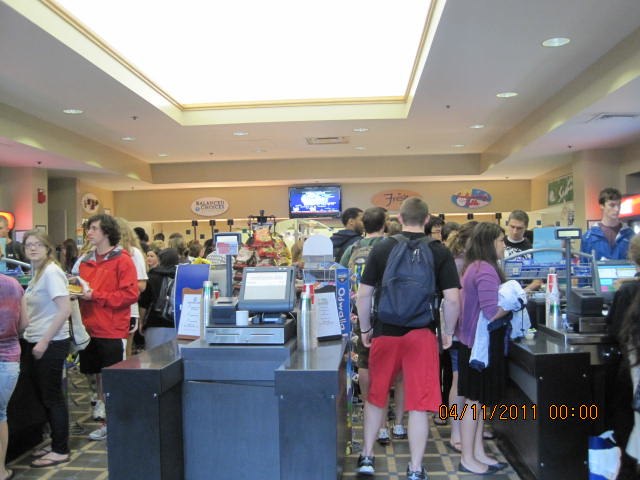