As we walked around the beige stone buildings that make up Rhodes’ campus, we felt like we had stepped into Hogwarts. The campus has the quintessential look of college with a series of uniform buildings all constructed of beige stones produced from the same quarry. Rhodes is affiliated with the Presbyterian church, but there is no religious overtone on campus.

The Rhodes admissions officers greeted us warmly as we entered our first session where we got to meet President Marjorie Haas who started in 2017 as the first female, Jewish President. She outlined her key institutional

priorities for the campus, which include:

Rhodes college is a small liberal arts and sciences college that is a member of the Colleges that Changes Lives consortium. Rhodes’ emphasis on the sciences is evident; they send 35-54 students per year to medical school, more than other peer small liberal arts colleges. With a new $35 Million science facility, numerous opportunities for student research-as early as freshman year, deep ties with St. Jude’s Hospital, and extremely strong pre-med advising, students pursuing this route are offered many advantages.

While pre-med students abound on campus, we also met numerous students and professors in other fields. Computer science is booming and is the second largest major in the senior class. Exciting faculty research is taking place at Rhodes and active student participation is encouraged. Within the Biochemistry and Molecular Biology Committee alone, ten professors are actively engaged in research projects that represent a diverse range of perspectives. Virtual Reality research is very popular, as is the state-of-the-art VR research lab.

On our tour we met Emma, a senior computer science major from Dallas who not only presented Virtual Reality research a recent conference, but also participates in Camp Codette, an all-girl computer science camp that was started by Rhodes students and faculty in 2015. We also met Ellie, a senior from Charlotte, NC who is a pursuing Biology. She told us how much she enjoys the character of Memphis, the strong musical history of the city, and the active community engagement she finds at Rhodes. Cindy, a psychology major/music minor who has a published paper and has attended 6-7 research conferences expressed to us how important she found the interdisciplinary academic approach at Rhodes to be. The “explore broadly and then specialize” concept, along with individualized advising, helped her decide on her direction.

We heard from a music professor who works in conjunction with Mike Curb, a record producer and also teaches at Belmont. They founded the The Mike Curb Institute for Music at Rhodes College in 2006 to foster awareness and understanding of the distinct musical traditions of the South. In the context of Rhodes’ liberal arts environment, the Curb Institute works on campus and with community partners in Memphis to give students real-world opportunities that enhance what they learn in the classroom. Students work in teams doing video promotion, audio productions, public relations, marketing, research, writing, and community engagement. Rhodes boasts a mIni-production company on campus.

Our panel also included professors from the Chemistry and Psychology departments. Both expressed the importance access to the community has been for the success of their students. In the health sciences area, St Jude’s provides countless opportunities for research, shadowing and internships. Psychology majors recently participated in a gender, sexuality, religion and mental health study where they, along with their professor, collected data with local churches about attitudes toward homosexuality and how they are formed. Students were included on the final papers.

Finally, Rhodes has a comprehensive career services department and advocates a four-year approach for success. 75% of Rhodes students participate in the Academic Internship Program which partners with over 100 local, national and international employers.

Students have to live on campus their first two years and there is a push to increase that to three years. Approximately 70% of students live on campus.

Greek life is a big part of social life on campus with just over 50% of students participating in it. There are no houses on campus, but they represent a large part of the social life, however students do not have to join. There was some push on campus to build a central student center on campus to offer more social opportunities. One of the students on the panel has been organizing micro bloc parties to bring more live music on campus for the entire community of professors and students to enjoy. Students also take advantage of their Memphis location and go to local restaurants and bars.

The administration has instituted more education around healthy drinking to reduce binge drinking on campus, which had been a problem in the past. They said that the percentage of incidents of binge drinking have dropped this past year due to their efforts. Students have also pushed to have more access to meeting spaces for events and so far, have had success.

The students we met were engaged, motivated and “happily busy” as one of our tour guides described. The majority of students come from the South, but almost all the states are represented and 10% of the students are international and 30% are people of color. The small school size lends itself to a tight-knit student body who is also dynamic, giving, vocal and intelligent.

The students were dressed casually with a mix of leggings, sweats, jeans, and t-shirts. Our tour guides all sported the admissions striped rugby shirt. We had two tour guides. The first one was British but moved to Houston in 2008. He was a thoughtful, compassionate young man who had just gotten accepted to medical school the previous Friday. He spoke enthusiastically about the beautiful new science center and opportunities. Our second tour guide, also from Texas, was very involved in the a capella and music scene on campus, Greek life, and political science. He participated in some pre-law activities but realized that he did not want to be a lawyer and was in the throes of figuring out his path after graduation.

Rhodes is located in Central Memphis, close to cute towns such as Cooper Young, a young hipster area. The city of Memphis is racially divided with a large poor black population as well as a large upper and middle class white and black population. Students take advantage of the city dynamics through numerous service and research projects. Memphis also has numerous employers, namely FedEx and St. Jude’s Hospital, who actively seek out Rhodes students for internships. For example, students have worked at FedEx on logistics and Rhodes in bioinformatics. We had the opportunity of staying in downtown Memphis and had some delicious BBQ at the famous Rendez-Vous restaurant where we met the owner and he showed us pictures of several presidents and famous people who had eaten there. Memphis also has a thriving music scene and an excellent Civil Rights museum.

Rhodes uses the Committee Based Evaluation to review applications, which means that two admission officers read the application simultaneously for eight minutes. One officer focuses on the transcript and test scores, while the other looks at the essays, activities and letters of recommendation. Once they make their recommendation, another admissions officer makes a final, much quicker review to make sure that everything adds up.

Admission to Rhodes is competitive. They look for academic rigor and test scores. The middle 50% range of SATs was 1240 to 1400 and ACTs were 28-32; 55% of their incoming class ranked in the top 10% of their high school class. They do not meet full need for all students but do meet full need for all African American students. Below is the median award by income.

Rhodes is a great college for students looking for small liberal arts and sciences college in city with a tight-knit community with a beautiful campus. It’s also great for pre-health science students who want excellent advising and access to excellent hospitals and research opportunities with a thriving music scene. 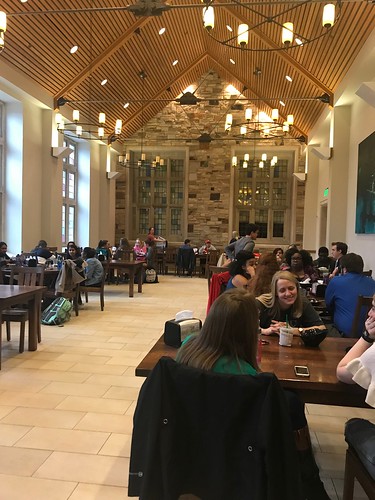