Feb. 2012 –  I, too, spent a week at Swarthmore, but as a student in the IECA Summer Institute program.  During the week I became very familiar with the Science Center, the dining hall and my dorm room at the edge of campus.  Most of the students on campus were attending a variety of high school sports camps; Swarthmore does not hold any classes over the summer.  As part of my week I did get attend an info session and get a tour of the campus from a student.  I did not fully appreciate Swarthmore until I revisited the campus in the fall when it was filled with students.

Our tour guide was a very enthusiastic biology major who literally bounced from one highlight of campus to another.  Every place we went friends greeted her.  She spoke enthusiastically about the relationships she had formed with her professors and how important that was for her.  The academic buildings are clustered at the top of the campus and are very well appointed with beautiful lab space and light- filled classrooms.  She echoed the theme that we heard in the info session that Swatties are self-directed, intensely involved with their academic and extra curricular pursuits, and are competitive with themselves, not with each other.  While Philadelphia is only 22 minutes away by train, social life is primarily on campus.  (They were preparing for a big Harry Potter themed event that night).  The dining hall that I found dark and drab over the summer, seemed much more appealing filled with students gathering for lunch and socializing.

I thought that my large, new, air-conditioned dorm would be one of the more coveted rooms on campus, but I learned that was not the case.  Because the majority of the dorms do not have A/C, it is not available during the school year for students living in these dorms.  It is only turned on for summer programs.  This is the Quaker way – fair for all.  The Quaker influence remains strong — consensus building, fairness, shared decision-making are all part of the Swarthmore experience.

Aug. 2010 – I spent last week as one of the faculty for the Independent Educational Consultant Association’s (IECA) annual Summer Institute for people relatively new to the field of educational consulting who want to learn more about the business.  The Institute was held as Swarthmore College, a small liberal arts college (1,500) about 22 minutes outside of Philadelphia.  I lived there for a week and got to experience the college intimately.

Swarthmore has a beautiful campus replete with gray limestone buildings, Adirondack chairs that pepper the campus from the first signs of spring to the end of fall, vast open space, beautiful trees and large lawn areas for students to sit and relax.  One of the engineering students built a gigantic Adirondack Chair as a project that has since become a landmark in the center of the grassy area.  There is also a mini arboretum and rose garden.   All of the buildings look like they have been there for a long time, but the insides are all renovated.  There is one central dining hall to promote a sense of community within the campus. There is also a small café in the science building and a lot of informal seating areas throughout campus to gather and relax.  The dorms are modern and located at the bottom of the hill.

Swarthmore follows the Quaker tradition of “life of the mind”, which was apparent through the passion and intensity of the students that we met.   One girl enthusiastically told us about her theater experience at Swarthmore and how she and some friends started a Shakespeare club to perform more Shakespeare plays on campus.  Another guide talked about the BNN club for students of color and about their trip to Ghana (which has since been canceled for future classes) and the impact that trip had on his education.

The academics at Swarthmore extend from the classroom to the dining hall to the dorms.  Debate, discussion, and discourse are also hallmarks of the Swarthmore education because students genuinely enjoy what they are studying and want to share their ideas with their fellow classmates.  “Swatties” (as they call themselves) have a few distribution requirements including 3 social sciences, three humanities and three math/natural science courses. All students prepare a senior thesis/project as their capstone project which they defend orally to experts in their field that are flown in from all over the world.  There is an honors track, which takes a subject in more depth and a course track, which provides more breadth.  There is no distinction between the two; rather it is just a question of the way a student prefers to tackle his education.  Swarthmore is one of a handful of small liberal arts colleges that also offers engineering.

Social life revolves around the campus activities, of which there are many lectures, movies, performing arts, and parties.  Philadelphia is an easy train ride away (22 minutes) and the train station is down the hill from the college.  There is a small town within a 5-minute walk distance from campus and a Swarthmore provides shuttle service to a plethora of stores and restaurants located in strip malls about 5 minutes away.

Swarthmore also believes in practical liberal arts and has a strong alumni network. They provided an opportunity for current students to live with an alumnus/a for a week and shadow their profession.  This is a great way for students to create connections with alumni and with prospective employers.

Swarthmore is highly select, however they take a holistic approach to their decisions.  The Associate Dean of Admissions said that each year they have different institutional needs, but in general Swarthmore students are passionate, intellectually curious, non-competitive, and enjoy learning for the sake of learning. 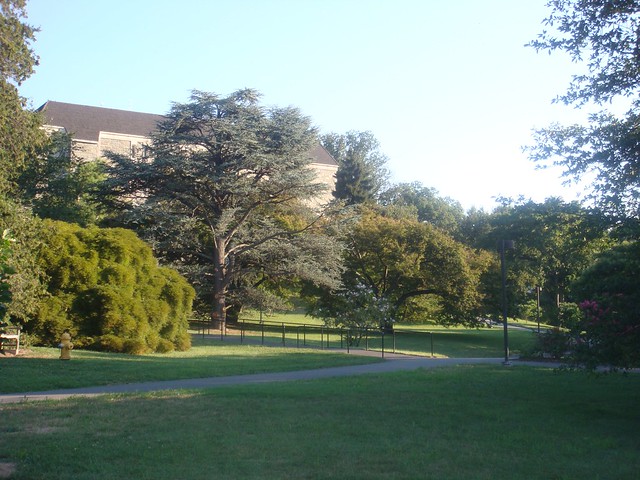