I recently visited Trinity College in Hartford, CT.  Despite it’s name, Trinity is an independent, nonsectarian liberal arts college with 2200 students.   What makes Trinity unique – it is one of the few small liberal arts colleges located in an urban environment.  Once on the campus, Trinity does not feel very urban.  The campus is perched on the top of a hill and the surrounding area is mostly the residential outskirts of the city.  There is lots of open green space at the center of the campus and the athletic fields adjacent to the Quad make the campus seem even larger than its 100 acres.  Trinity has acquired much of the property surrounding the campus and has formed partnerships that benefit the community and the school.  The most notable neighborhood revitalization program is the nationally acclaimed Learning Corridor.    Community engagement is another defining characteristic of Trinity and over half of all undergraduate students participate in community learning courses, projects and internships.

The typical Trinity student has a B+ average with 1950 on the SATs.  Trinity is flexible in the way it accepts test scores — SAT, ACT (they super score both) or two SAT subject tests can be used for admission.  They want applicants to present themselves in the best light possible.  In the past, Trinity typically received 5,000 applications for 550 spots; this past year they saw a 48% increase in applications – over 7,000 students applied (Trinity dropped their Supplement and that contributed to the increase in applications).

They offer Early Decision 1 and ED 2 options.  The student body is 50% male/50% female, 22% are students of color.  The students we met were down to earth, slightly preppy and on the whole, sporty.  40% of the student body participates in intercollegiate sports with many more enjoying club or intramural sports.  We met tons of rowers on our visit – a traditionally popular sport at Trinity.  Approximately 18% of students go Greek and the frat parties seem to be a big part of the weekend social life.  We heard mixed reports about how much Greek life dominates the social scene on campus.  Social life is predominately on campus – in addition to the frat parties there are campus wide parties, dorm parties and a first-run movie theater right on the Quad.  Students do venture off campus for some change of scenery – one junior we met has a car and she and her roommate go into West Hartford to go out for dinner every once in a while.  Another senior said he and his friends now wander off campus to frequent some local bars.

Trinity is a true liberal arts college that also offers engineering.   There are distribution requirements — one course in each of five disciplines is required: Arts, Natural Sciences, Social Science, Humanities, and Numeric and Symbolic Reasoning.  There is a two-course writing intensive requirement, a global engagement requirement, and a second-language requirement.  In addition, all first-year students participate in a first-year seminar of their choice (topics range from Mathematical Ideas and Changing Times to BFF or Strange Bedfellows:  Cohorts, Compromise, and Political Destiny).  The professor leading your seminar becomes your academic adviser until you pick your major.

Students are grouped in dorms by seminar to facilitate the transition to college.  Trinity students study abroad at either one of the Trinity sponsored programs (among the most notable, Trinity Rome Campus) or at other programs approved by the college.  Trinity’s newest study-abroad experience is a summer program along China’s Yangtze River.

What makes Trinity special?  Class sizes are very small, the average class size is 18 but two-thirds have fewer than that.  Faculty members teach all classes and the student-faculty ratio is 9 to 1.   The Professors are actively engaged with the students — their commitment to teaching and advising students is very clear.  There is also a particularly strong tie with alumni – our tour guide’s (a senior) father went to Trinity and his sister is now a freshmen.

The arts scene was less developed at Trinity.  There are singing groups and theater productions but the facilities for and breadth of offerings in the performing arts are on a smaller scale. One of the admissions offices said that there is a plan for a sizable capital campaign to develop and build a new arts center on campus, but that was put on hold due to the economic downturn.

Trinity would appeal to students who are looking for a small, academically rigorous and nurturing environment – who find being near a city more appealing than a rural location – who want the opportunity to take advantage of internships and community-based projects – and who want balance between their academic and social lives.  Student/athletes would likely find themselves at home at Trinity. 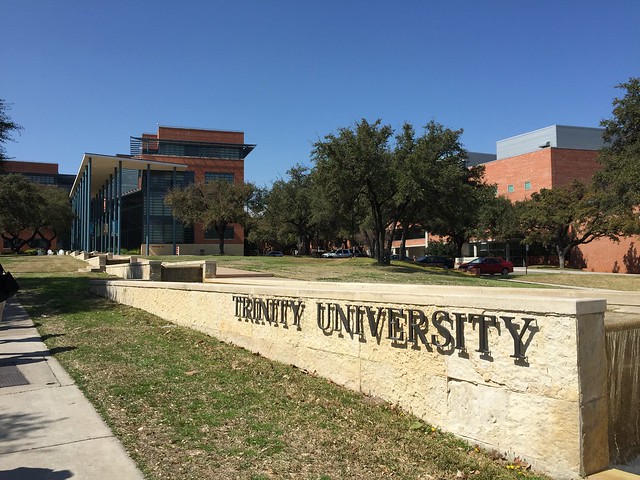