The University of Minnesota (known as U of M or The U) offers a pretty typical Big 10 school experience – strong academics, lots of choices, great sports, plenty of school spirit, and extensive tailgating. The campus is vast and is split down the middle by the Mississippi River with half of the school located in Minneapolis and half in St. Paul. Some areas of the campus are pretty and green with diverse architecture, and other areas feel more urban. There are several notable buildings on campus including the Weisman Art Museum designed by Frank Gehry and the impressive new Rec Center. Getting around can be a bit difficult, but the campuses are connected by a light rail system and a bus system. There is also a tunnel system that connects many buildings, for those cold winter months.

U of M has become more selective over the past few years and now has an acceptance rate just slightly below 50%. Students apply to one of the seven schools which include Biological Sciences, Design, Education and Human Development, Food Agricultural and Natural Resource Sciences, Liberal Arts, Carlson School of Management, and Science and Engineering. Within the schools there are over 150 majors. The Department of Theater Arts and Dance is housed in the College of Liberal Arts and offers a joint BFA Actor Training Program with the renowned Guthrie Theater. Some of the other most recognized programs at U of M are mechanical and electrical engineering and health care management. The Carlson School of Management is also very well-regarded and admits 550 students each year. Two of the most popular concentrations within Carlson are Sports Management and Management and Information Systems. Carlson boasts that 98% of their graduates have jobs within three months of graduating. Graduates are helped by the surprisingly large number of fortune 500 companies (17), private companies and nonprofits in the Twin Cities. Companies like 3M, Ecolab, United Health, General Mills, Target and Best Buy are filled with U of M alum. The University of Minnesota also has a very strong honors program and the largest study abroad program in the nation. Two thirds of students are from Minnesota, with the next most prevalent state being Wisconsin. And then there is a sprinkling of students from each of the remaining 48 states. Two thirds of graduates remain in the Twin Cities after graduation. There’s plenty to do on campus with over 800 clubs and student organizations. Greek life is an option with about 12% of students participating. There are lots of parties, concerts, performances and student-sponsored activities on campus and the majority of students also venture off campus for social life. The campus sits in a very livable neighborhood of Minneapolis, populated mostly by students, so that it feels more like a college town then a major city. There are lots of great restaurants and bars within walking distance to campus. The downtown areas of Minneapolis and St. Paul are easily accessible by light rail and bus. Almost 90% of freshman live on campus in dorms but after the first year, most students move off campus into apartments.

Winters in Minnesota are cold and long. The good news is that they are also sunny. Within very close proximity to campus there’s plenty of skating, cross-country skiing and even downhill skiing. And you’ll see people outdoors all winter long running with clamps attached to their sneakers and cycling on bikes with fat tires. The student body is an athletic group, with more than 75% of students participating in some sort of varsity, intramural, or club sport.

The students on campus seem happy and full of school spirit. The freshman retention rate is 93% overall and 98% in Carlson. Given that generations of families have attended The U, the alumni network is strong and influential in the Twin Cities.

With such a big campus, so many students, and endless class choices, you can find whatever you’re looking for at the University of Minnesota. But, you can also get lost. Students at the U of M must take initiative to find their niche and make their own way. 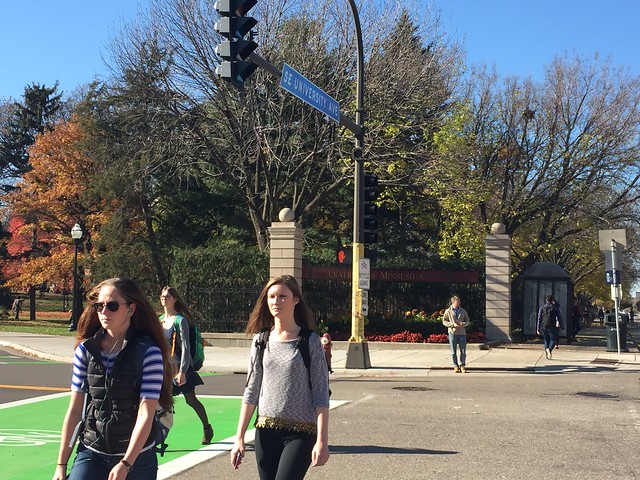