I visited USC in November, on the eve of the big game against UCLA. The Trojans have a tradition of wrapping all of the statues on campus to protect them from any Bruin mischief. We toured with my friends amazing daughter who is an art history major. Even though it’s a small department, she has lots of great choices for classes and raved about all of her classes, including her requirements. She also scored an internship at the Art Institute of Chicago. For a larger school, the campus feels surprisingly small and is very walkable. Our guide knew almost everyone who passed by. And of course, the weather is literally perfect.

Feb., 2013 – I had the opportunity to revisit USC with a group of independent consultants earlier this month.  We arrived the day after Steven Spielberg dedicated the new film building.  A few highlights related to USC’s highly competitive and esteemed Cinematic Arts major.  Students require 3 letters of recommendation, one academic and 2 others.  It is best if the letters come from someone who can speak to the candidate’s talent for storytelling.  Students may need to send additional samples of writing or short films.  Film students must apply by 12/1.  A student’s ability to tell a story is key to admissions, so not only should the supplements show that, but also their essays must convey a keen sense of story telling. USC is adding a dance major for 2014 along with a Human Performance major, which combines kinesiology and how the body works with regard to performance.  Students can now apply directly to the Occupational Therapy major.

USC is also adding a Division 1 Lacrosse team, which will open up more opportunities for lacrosse players.

My impressions of USC remained the same.  It is a lively, active, beautiful campus with articulate, professional minded students who have a strong ability to achieve.

Dec., 2011 – Last week I toured the University of Southern California while visiting my family in Los Angeles; my parents accompanied me on the tour.  My dad is an alum, so it was fun for him to see how much the university had changed in the past 50+ years.  He asked one of the Admissions Counselors, how did USC go from being a not so great school 50 years ago to one of the preeminent universities in the country.  The Admissions Counselor attributed the meteoric rise in popularity and selectivity to President Sample who served during 1990’s through 2010 who focused on attracting a more select group of students and investing heavily in the programs.  His strategy worked, as USC is very heavily endowed and the students have great pride and enthusiasm for the school.

USC is an urban, self-contained campus right in the heart of Los Angeles.  You can see the skyline for downtown LA from the campus, which is about a ten-minute drive.  The campus is very pretty with brick buildings and red, Spanish tile roofs.  They recently completed a new student center and admissions building modeled after a European square with a large courtyard replete with outdoor tables and umbrellas.  There is even a large curved staircase called the Steps of Troy reminiscent of the Spanish steps in Rome.  The student center has numerous eateries including a California Pizza Kitchen, Peets Coffee, Panda Express, Wahoo Fish Tacos, and a sit down, fancy restaurant.  Directly across the street is the Coliseum, a massive sports arena where the Trojans games are held, museum square (the Natural History Museum, etc) and Exposition park.  There is also a train line right outside of campus that currently takes students to down town Los Angeles, Old Town Pasadena and eventually will go to Culver City and Santa Monica.  These are all thriving hubs in LA.

The campus is very lively with students biking, walking, chatting, and skate boarding (on long boards and regular skate boards) throughout campus.  The student body is highly diverse with a wide range of ethnicity and nationalities represented. USC has one of the highest international student populations as well.  Signs peppered throughout campus were written in English, Korean, and Chinese.  Students sported skinny jeans, leggings, Trojan sweatshirts, jeans, shorts, Vans, and scarves. I would describe the students as a mix of Urban Hipster, laid back, and pre-professional looking.

All of the undergraduate colleges along with several graduate schools are located within the USC gates.  USC is a private research university and while they have numerous highly ranked pre-professional degrees, they emphasize inter-disciplinary studies and all students have distribution requirements that they take as part of the core curriculum.  There are 17,500 undergraduate students and 19,500 graduate students.  The graduate students are largely in the health sciences and those students are at a different campus. 98% of freshmen live on campus in either suite style dorms or traditional dorms.  Typically students live in off-campus houses, fraternities or sororities, by their junior year.

The most notable schools and programs are film, visual and performing arts, music, business, engineering, and the sciences.  They recently received a $50 Million endowment from the founder of the Price club (now Costco) for their school of public policy.  USC also has an outstanding school of Gerontology and aging.

Our tour guide, who hailed from New Jersey, is a double major in the film school and the Marshall School of Business.  He initially came to USC for their business program, but got interested in the entertainment industry once he started taking classes.  He studied in Shanghai for a week and a half through the Marshall School.  These short sojourns abroad are common through Marshall where students go to places like India, Cuba, and China.  He had an internship at a top talent agency over the summer and would like to pursue a career in television on the production/producing side.  Most of his extracurricular involvement centers on pre-professional clubs such as the Hospitality club where students get behind the scenes tours of Las Vegas casinos and several high-end hotels. He wore skinny trousers, a button down shirt and a tie for our tour.  He loved USC because it is a self-contained, urban campus with incredible school spirit (USC had recently trampled their long-standing rival UCLA in football) and complete access to LA and all that the city has to offer.  He described the students as outgoing, loud, social, focused, achievement oriented, but also enjoy getting out and having fun through sports, clubs, theater, movies, etc.

Admission to USC is highly competitive. They accept 23% of their applicants.  For non-talent based programs, admissions is based on success in a rigorous curriculum, test scores and outside activities.  They take a holistic review of the application.  USC is very generous with merit scholarships that range from one quarter to one half, to full tuition.  Students are automatically considered, but must have their applications in by 12/1.   Students will find out in January if they are in the running for the scholarships and will be invited out to campus for an interview.  Admissions for talent based programs e.g. film school, BFA in Drama, School of Architecture of Fine Arts, is based 50% on academics and 50% on talent.  Students list their top two majors and are considered for their first major, then their second, and finally if they are not eligible for either, then USC may admit you as an undeclared major.  Students can easily transfer among the non-talent based programs, but must audition for transfer into a talent-based degree.

USC is a great school for outgoing students looking for a diverse urban environment with a self-contained campus, school, spirit, undergraduate research, and will take advantage of the myriad opportunities available. 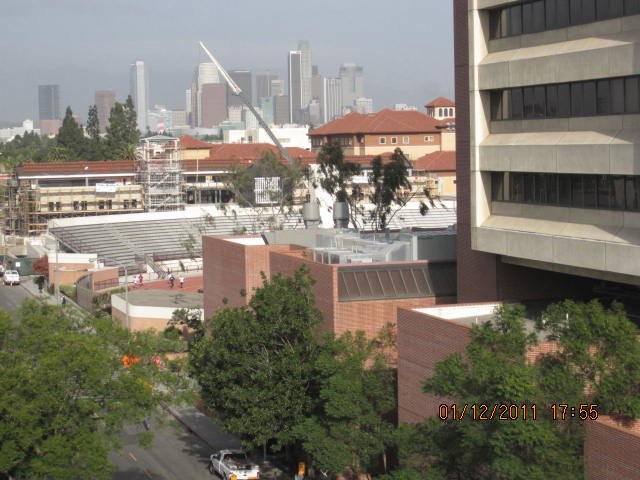