Ursinus is a very pretty small liberal arts college about 40 minutes outside of Philadelphia. The surrounding area has a suburban feel with nice stores and restaurants.  The campus is shaped in a manageable square with several green quads throughout.  The campus boasts its own art museum, a state of the art performing arts center and athletic facility.  About 25% of students play a varsity sport, but about 50% participate in club or intramural sports.

Ursinus’ most popular majors are biology and business.  Their medical acceptance rate is impressive at 92%.  Students get ample opportunity to do undergraduate research.  Other strong majors are English, Psychology, and Exercise Science.  Freshmen participate in the Common Intellectual Experience (CIE), a two-semester-long course required of every student.

Ursinus has a very diverse student body.  25% of students receive Pell grants (only available to families whose household income is < $30K), 26% are students with color, and roughly 25% of student are the first generation of students in their families.

Students are down to earth, friendly, clean-cut, and interested in learning. The students said they feel very safe on campus and are comfortable leaving their phones and computers out without worrying about theft. Faculty interacts a lot with students, which is one of the things students enjoy.  Social life is centered on campus.  Students frequent the various sporting events and musical and drama productions available.  Dorm sponsored events are also popular.  There are two freshman dorms, and the rest of the campus housing ranges from traditional dorm style living to suite style apartments to themed houses along Main Street. There is one central dining hall on campus with two distinct options: upstairs provides an all-you-can-eat traditional cafeteria with various food stations whereas downstairs offers a la carte, fast-food dining.

Ursinus offers numerous merit-based scholarships ranging from $2,000 to $30,000.  They believe in spreading the wealth and offering some money to all students rather than large scholarships to a select few.  There is, however, a JD Salinger creative writing scholarship that covers the full tuition.  (JD Salinger attended for 1 semester and the winner also gets to sleep in his dorm room.)

We each had a different tour guide.  My tour guide was on the girls’ Basketball team majoring in Biology. She was very friendly and found Ursinus classes

challenging, but not overwhelming.  Beth’s tour guide, Angela, was a senior Exercise & Sport Science major with a Spanish minor.  She hailed from NJ and came to Ursinus because she wanted to study physical therapy and play soccer.  She had considered some of the 3-3 PT programs but decided against them.  The undergraduate program here allowed her to prepare for graduate school as well as play soccer and study abroad in Spain. Angela was accepted to the PT program at Thomas Jefferson University. Diane’s tour guide, Zack, was a Biochemistry and Molecular Biology major with a double major in Spanish.  He was accepted to the Early Assurance Medical School Program with Drexel as a high school senior.  He studied abroad in Spain, first semester, junior year.  In addition to being a tour guide, he is a Resident Advisor (RA) and member of a fraternity.  He is from Yardley, PA.

After the tour we had the opportunity to read actual applications and weigh in on our decision.  Each applicant had a bump in the road and we had to present the candidate to the committee.  Those candidates who had demonstrated that they could handle the academic rigor and had learned from their mistakes (which ranged from alcohol to stealing) were ultimately accepted, whereas candidates who had not shown growth were denied.

Overall, it showed that colleges like Ursinus do a holistic review and really try to give students the benefit of the doubt. 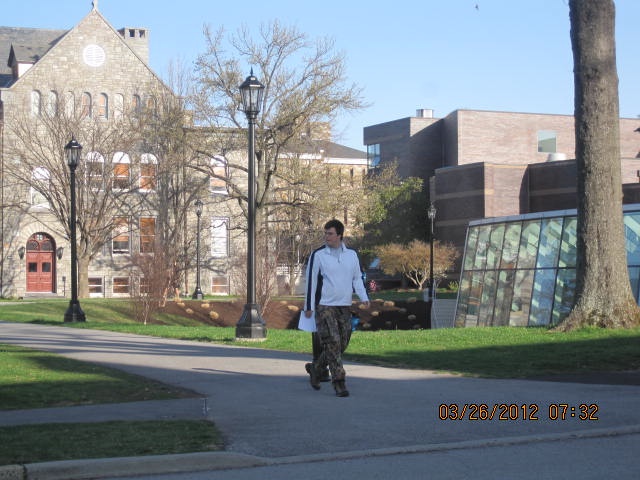