Founded in 1861, Vassar College is a highly selective, residential, coeducational liberal arts college. Consistently ranked among the top liberal arts colleges in the country, Vassar is renowned for pioneering achievements in education, for its long history of curricular innovation, and for the beauty of its campus.

Lisa visited Vassar, a highly selective, residential, coeducational liberal arts college. This top-ranked school of 2,500 students places an emphasis on engagement in both teaching and learning. Vassar is renowned for the achievements of its students, the innovativeness of its curriculum, and the beauty of its campus.

Vassar offers a flexible approach to the curriculum. Students generally declare one of 51 available majors by the end of their sophomore year. Students have a choice of four paths to the Bachelor of Arts degree. These include a concentration in one of:

An individually tailored course of study in the independent program is also an option.

Within the major field, requirements range from 10 to 17 courses. Vassar offers students over 1,000 course options.

An emphasis is placed on students striving to be global citizens. To this end, all students whose first language is English are required, before graduation, to demonstrate proficiency in a foreign language. Twenty-three languages are taught at Vassar.

Class sizes are small, with first-year classes averaging 20 students and upper-division courses averaging 12. Students are expected to engage in the classroom. The typical course load is four classes. Students report that academic work is hard, but not overwhelming, and they find a sense of mutual respect and collaboration within their classes.

Vassar students enjoy an extraordinary amount of contact with their educators. Seventy percent of professors walk to work, and 14 faculty families live in the residence halls. A new emphasis is being placed on intensive project-based courses that will be mentored by faculty. Faculty will now teach four classes a year and one intensive instead of five classes per year.

Nearly every department and program at Vassar sponsors community-engaged learning (CEL), an experiential educational opportunity that combines work in a non-profit organization, a government agency, or a business with academic work. Most placements are in Poughkeepsie and the Mid-Hudson Valley, but about 10% of students arrange their own placements in New York City and elsewhere.

Mentored research and project-based classes on niche topics are popular at Vassar. In previous years, students traveled to the Southwest for an archaeology dig and discovered a dinosaur. Forty-five percent of students study away, typically abroad, but many also head to Washington, DC.

At Vassar, everyone lives on campus. First-year students live in one of nine residential houses, and by senior year, most students are living in on-campus apartments.

There is no Greek life at Vassar, and the social life is campus-based. Twenty-three varsity sports teams compete in the Liberty League. There are 125 clubs, and arts endeavors are hugely popular, with over 40 shows per year. Vassar boasts nine a cappella troupes. School and local dance troupes and guest speakers and performers are popular forms of entertainment. New York City is an occasional diversion, but not a big part of the Vassar social life.

Vassar College is one of the larger schools within the Council of Independent Colleges. Beyond size, however, is Vassar’s reach. For a small college, Vassar has garnered a reputation both nationally and internationally. With the exception of North Dakota, all US states are represented. 22% come from New York, 12% come from California, and 11% are international. 32% identify as students of color, and 13% are first-generation students.

Vassar fosters individuality and differences are celebrated within the student body. Independent thinkers are the norm. While visiting campus, we met several students who shared their experiences:

Mia, a psychology and education major from the Bay Area, is a fine arts performer and a member of Jewish Life. She is involved with the Urban Education Initiative, which connects Vassar College to the City of Poughkeepsie public schools in an effort to increase educational opportunities for public school students in the community.

Mia described how the course Psychological Perspectives on the Holocaust taught her how to look at history through a psychological lens.

Mia noted that it took two to three months to find her “people,” but she loved the academics right away. She said, “It’s incredible what can happen when you’re not trying to get into college. I can just study what I’m interested in!” She described the Listening Center on campus, where students listen to others about anything that they want to discuss. When adjusting to college life, she found this manner of talking with peers to be a lower entry barrier to asking for help.

Ava, a junior and history major from Massachusetts, works in the admissions office and serves as a House Fellow Intern for her residence house. House Interns pair with the House Fellows to serve as academic resources and inject the House with intellectual discourse (usually over food). Ava took a class on migration, which was shaped by students. She enjoyed the discussions on what the words home and family meant amongst her peers. Ava described seeing her professors as resources versus experts.

Martin, a senior drama major/ film minor from Bulgaria is involved with environmental activism, a social arts group, and an a capella troupe. He spoke of a year-long history class about drama and how this global class offered a wide perspective on theater. In his time at Vassar, he has learned that everyone needs to make their own opportunities, regardless of resources.

Finally, we met a sophomore from New Jersey who is pursuing a 3+2 at Dartmouth for engineering. He is a recipient of the Pratt fellowship for diversity inclusion. His interests include Habitat for Humanity and theater. His most interesting class involved learning about the history of the genocide in the Congo and why it was erased.

Students and staff discussed a continued effort to bring more diversity of religions, races, and perspectives to campus.

Vassar College is located in Poughkeepsie on a beautiful, 1000-acre residential campus, which includes a golf course, Sunset Lake, an observatory, and seven miles of trails for running and X-Country skiing. The Vassar Farm, a working, organic farm encompasses over 500 acres, most of which are actively managed as an ecological preserve. The athletic facility and rugby field are located near the upper-class housing. Poughkeepsie is a town of 120,000 and is a 95-minute train ride into Grand Central Station in NYC.

Students are not admitted based on their intended major and demonstrated interest (visiting the school, etc.) is not considered in admissions decisions. Legacy considerations are made for parents only.

Vassar seeks to make a college education affordable and accessible to all admitted students. Through a generous financial aid program, Vassar meets 100% of the full demonstrated need of all admitted students, international or domestic, for all four years. Average aid is $52,000. Vassar currently awards aid to over 60% of their students, with awards ranging from $1,200 to $60,000. Admission to Vassar is need-blind for Americans, but not for non-citizens. 22% of students are eligible for Pell Grants. Vassar does a great job of enrolling students from all walks of life.

For students on Vassar’s admission’s waitlist, once the aid budget has been met, waitlist students become need-aware. Questbridge applicants must have $1,000 or less expected family contribution (EFC) to match.

Vassar College is a tight-knit community in which strong and passionate students of divergent views and backgrounds come together to study, work, and live. 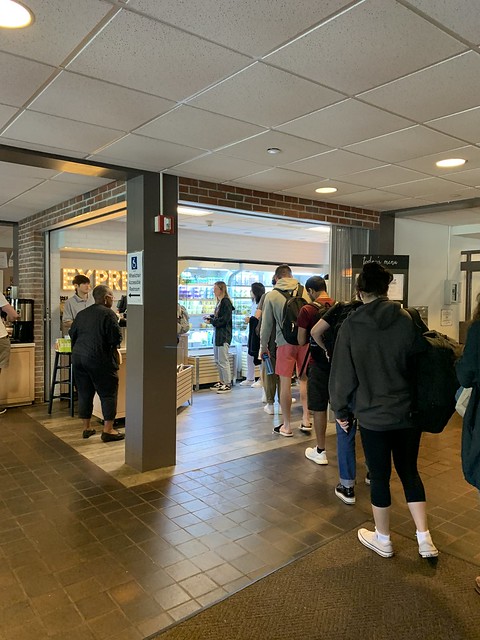