I pulled up to the Admissions Office parking lot at Webster University and there was a spot waiting for me with my name on it, literally! Everyone I met at Webster was friendly, welcoming and happy to be there. A street runs through the campus. On one side of the street there is a self-contained campus with a central quad and the other side there is a mix of old and new buildings. There is also an equity theater on campus providing great opportunity for theatre majors.   It is located in a suburb about 20 minutes outside of downtown St. Louis. I had the opportunity to meet with Andrew Laue, the Associate Director of Admissions—Fine Arts for Webster University. We discussed the strong theatre program, which includes excellent programs in Theatre, Stage Management, Directing, and Design: (Scenery, Costumes, Lighting, Sound, Wigs/Makeup, Concert), and Technical Production (Technical Direction, Scene Painting, and Costume Construction). Theatre is a closed major, so students outside the theatre major cannot take classes in theatre. However there is a theatre studies and dramaturgy major outside of the Theatre school.

Students must first get accepted into Webster University academically and then they audition or go through a portfolio review for acceptance into one of the fine arts majors. All theatre majors require an audition or portfolio review and must request this after they have applied. The auditions get filled up quickly, so Andrew recommends applying early to secure a spot. Students can audition on campus or at the Unified Audition Tour.

Theatre is the biggest and most competitive major in the department with an acceptance rate of roughly 8%. As a comparison, the costumes major typically has about 2-3 students per incoming freshman class. Approximately 12-15 students apply for costume design each year and go through the portfolio review. Webster accepts 5-6 students with a yield of about 2-3 per year.

There are a total of 180 students across all majors in theatre including design, directing, stage management, acting, and technical production.

Successful students at Webster learn how to network and promote themselves. To help them with this, there is an

entrepreneurial certificate specifically designed for performing and visual arts, film, and digital media majors. Some of Webster students have gotten internship on the Conan O’Brian show, CNN, The Emmy’s and KTLA (a radio station in LA).

Webster also has a very strong communications school with excellent majors in film production, scriptwriting, digital media, and video game design. The scriptwriting major is a “sleeper” major (meaning not as popular as is it should be) according to Andrew because everything in Hollywood needs a scriptwriter. Students with these majors also need to hustle and become entrepreneurial to be successful in the film industry because this type of work is project based and connections are key. Leah Latham , a Webster alumna, organized a film series on campus and developed relationships with a wide range of industry people. As a result she got a job working at Disney on Frozen. For these students their “reel” is key. It’s what gets them noticed and Webster not only helps students develop it but also teaches them on how to network at various industry events such as the International Thespian Festival in Lincoln, NE or the Virginia Thespian Festival. Students own their films and Webster provides all the film equipment they need to help them create their reels.

Webster is everything a state school isn’t.  There is no football, Greek life, or tailgating. It’s for students who don’t want that scene, ones who value their individuality and want a small, nurturing environment. There are 3,000 undergraduates.  Students are creative, tolerant, and diverse and like to do their own thing.  The student body is mostly regional pulling primarily from Missouri, Illinois and other surrounding states. California and Texas are also well represented with a few students each year from the NY area. There is also a hipster vibe on campus with kids in jeans, t-shirts, colored Converse, and hoodies. My tour guide, Molly, came from a conservative town in Missouri, two hours away. She changed her major from journalism to special education. She is very involved in Young Life (a Christian youth organization) and she said what changed the most for her was her awareness of human rights. She loved the diversity of the students and how open everyone was on campus. While I focused my tour on the Visual and Performing arts side, Webster also has good programs in education, nursing and business.

The average ACT score is a 24 and the average SAT is 1100. However Webster focuses more on grades than test scores. Webster offers a wide range of merit scholarships.

Webster is a great school for students with artistic leanings who want a small, welcoming environment. It provides comprehensive fine arts and communications programs with practical and liberal arts complements. 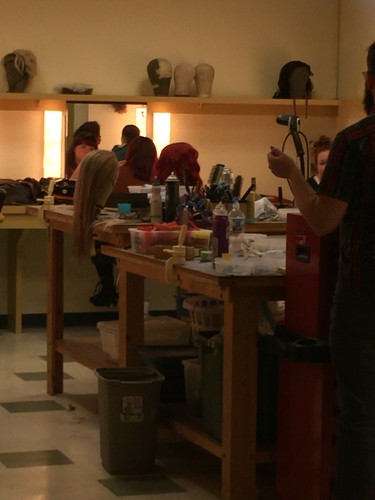