We took advantage of our vacation in the Berkshires to visit Williams College.We drove along the bucolic, windy, one lane highway passing large fields and not much else until we reached Williamstown, MA, a quintessential, small New England town.   We got out of the car and walked around the empty campus.  (School did not start for another week.)  The campus was very pretty with a large center courtyard and a mix of traditional and modern buildings.  We met a student who had arrived early to prepare for freshman orientation.  She came from California and was majoring in biology with the intention to become a veterinarian.  She was fresh faced, down-to-earth and extremely welcoming. She chatted with us about her experience at Williams. She came from California without knowing too much about the East Coast and chose Williams because she got in and knew that she could not pass up such an outstanding educational opportunity.  She said the classes are exceptionally challenging and interesting. She loved her interaction with professors and students.  While she enjoyed the environment at Williams, she did admit that as a junior, it sometimes did feel too small, but overall still loved the experience.

We walked around the small town and saw several other kids with bright yellow shirts emblazoned with JA on them.  We were just about to leave, when we met two young women dressed in cute sundresses who had a more artsy look to them.  We asked them if they were students and both were about to start their senior year.  Jody was from Chicago and Liz was from Los Angeles and had just gotten back from studying abroad at Oxford.  They both were eager to speak with us and were very excited about their experience at Williams.  Liz was majoring in English and danced with one of the Williams dance troupes.  Jody was studying Sociology/Psychology and was involved with the minority students clubs.  When they found out that my daughter was also a dancer, they offered to take us on a tour of the campus and especially the performing arts center. My daughter with Williams students

As we toured the science building and the performing arts center, including one of the most beautiful dance studios I’ve ever seen.  It was lined with wall-to-wall windows overlooking the campus, and I could tell that my daughter became more interested.   Our two guides were both articulate and incredibly bright.  Liz chose Williams over her Ivy League options because she wanted smaller classes and more interaction with her professors.  She also liked that there was no Greek system, which leads to a close-knit, inclusive student body.  About 60% of the students participate in sports and many also participate in the arts in some capacity.  All student activities take place from 4-6:30 during the week, and most students participate in something during that time.  Liz liked knowing that all of her friends were involved at the same time and that they would reconvene for dinner.  She also liked that the she could dance in a rigorous, but non-competitive environment with like-minded students and advisors who understood that they were students first.

All freshmen are part of an “entry” of about 20 students and one JA (we think junior advisor).  The JA serves as a mentor to the students and shows them the ropes from drinking responsibly to choosing classes.  This fosters a sense of community from the get go.  Students do work very hard at Williams, but the student body enjoys learning and has a strong intellectual curiosity.  About 60% of the students participate in sports as Williams has outstanding DIII athletic teams.  There is also a thriving arts scene on campus.  The town itself is very small, but there are several restaurants, shops, and the requisite ice cream store.  On the plus side, Liz said she spends very little money!

Williams is an awesome environment for a highly intelligent, down-to-earth, athletic student who enjoys learning, the arts, and a close-knit community.  Students must also be comfortable in a rural environment.

My daughter’s take:  At first I was ready to leave and thought it was too small and rural, but after speaking with those two girls, I really liked it.   I loved the dance studio and also the strong sense of community and academics.  I may apply here. 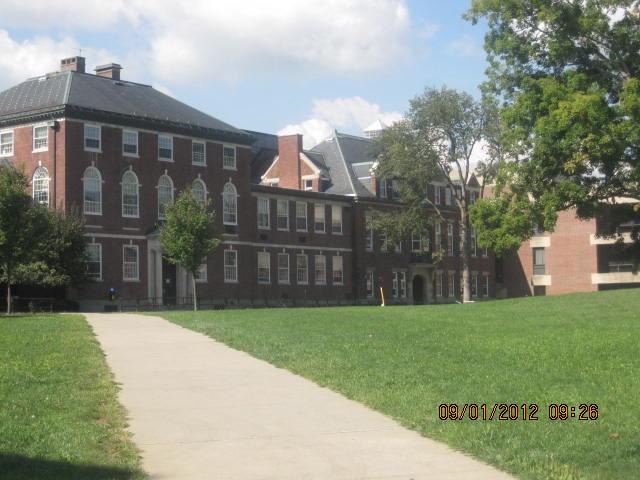